What better way to kick start the 5th Season of the Word N Sound Poetry League than to launch our 1st show of the year with the reigning Queen of the WordnSound mic, Thando ‘The Poet’ Buthelezi.

We chat to the Boston Media Graduate about the fine line between hiphop and poetry, her brewing audio tape and why she won’t be defending her title.

Showcasing the Queen of the Mic…

All Hail Thando Buhelezi
Reigning Queen of the Mic

Thando ‘The Poet’ Buthelezi blazed a remarkable trail through Season 4 of the WordNSound Poetry Slam League in 2014. A feat she brilliantly topped off with stellar performances at the Annual WordNSound International Youth Poetry Festival at the Soweto Theatre in October where she was ultimately crowned the Queen of the Mic.

She says that the endearing lesson she walked away from her yearlong battle on the WNS Slam stage was of discipline, hard-work and commitment to all aspects of her craft. Heading this lesson paid off, as Thando adamantly made her way through to the end not just for herself but for all those who supported her all the way.

What added to her spectacular journey was that Thando strives to write in and incorporates as much isiZulu into her work as possible and says: “Writing in Zulu is actually hard. I had to read, I had to learn, even the accent. I had to work on it because I had gotten used to the English way of writing”.

As the reigning Queen of the Mic Thando ‘The Poet’ Buthelezi will showcase her her witty wordplay and ethnically inspired writing as the feature Poet at the Premier Episode to Season 5 of the WordNSound Poetry League.

In closing Thando’s advice to those who want to slam in this years’ WNS Poetry League would be to take the Word N Sound stage seriously, and to do this for themselves more than to compete.

Video clips of our previous interaction with Thando:

Are you ready for SA’s toughest slam?

Get excited for your first dose of poetry, as we unveil our newly branded 5th Season of the Word N Sound Poetry League.

Kicking things off in Season 5’s first Episode of the Poetry League is the reigning Queen Of The Mic, Her Majesty, Thando Buthelezi – whose ethnically infused style of writing coupled with her witty word play creates a body of work unique only to her. She will be accompanied by 20 of Jozi’s dopest poets all gunning for her spot on the throne.

Have you got your eye on the Poetry League Champion title? Make sure you arrive early to sign up for SA’s toughest slam.

So join us for what promises to be the hottest poetry premiere of the calendar, as we anticipate more thrills, more spills, more spoils, more props, more poems and more everything. Episode 1 comes as a welcomed reprieve for most poetry lovers who’ve been starved of poetry thus far, so the only question is: are you ready for this year’s Word N Sound Poetry League?

Join us at the Market Theatre Lab in Newtown, doors will open at 12pm, the League kicks off at 1pm. The Queen of the mic showcases at 4pm.

Tickets will be sold for R50 at the door and space is limited.

Word N Sound crowns a new Queen of the Mic

Remember we told you the finals would be breath-taking? I don’t think any of us were fully prepared for the Word N Sound Open Mic Finals.

After months of competition in the Open Mic League this year, it boiled down to this one night. 3 poems per performer, one stage, one winner. We thought we knew. We thought we had an idea. We thought we’d seen it all…

…And then it began.

I don’t think the Soweto Theatre will forget what it bore witness on this momentous occasion. When we say it went down, we mean literally. The stage came alive with props, from oil and powder by a blindfolded Zewande, to condoms and cards by Thando, balls of paper by Nkosinathi, and smoke, courtesy of Xabiso’s incense; we saw flames (by means of a projection on the screen).

What did you expect though? This is the WordNSound stage we’re talking about.

The first round saw three contestants bowing out, leaving Xabiso, Zewande, and Thando to do battle for the crown.

At this point the gloves came off, (and so were the costumes). The competition was tight. The final points tally was close, but in the end there could only be one.

They stood on their feet, they pumped their fists and shouted her name, all this before the judges even announced it.

After a night of standing ovations, including one during her poem (believe it), the WordNSound Open Mic Crown went to the unsuspecting Thando Buthelezi. 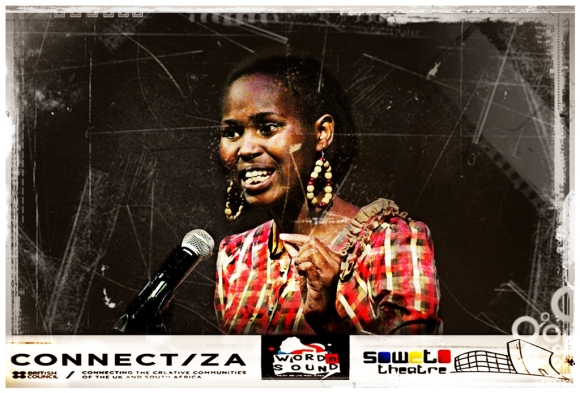 “I feel like I represent a certain group of people. I represent the rural ones. The rural guys who write in their Zulu language, those guys who don’t have a formal way of writing. I represent those people who are just .. you know?”

That is what Thando said a few weeks before the finals when we had asked her what set her apart from her compition.

My fave of the day, Thando The Poet. Her flow, her content, her card trick poetry. Slam Queen! #wnsfest @WordNSound pic.twitter.com/DDgnaEtpwC

@Connect_ZA @WordNSound what Thando does, weaving her story into scripture, rubbing us raw in this place

… and the audience agreed (well, the ones we spoke to after the show). They loved her. Congratulations to all of the finalists. The performances set a whole new standard.

Congratulations to the new Queen of the Mic.